Dr. Colleen Richardson is Coordinator of Bands and directs the Wind Ensemble at Western University, as well as teaches undergraduate and graduate courses in conducting and instrumental music education. In collaboration with Dr. Kevin Watson, she administrates the Western Young Winds program, which is a community band for students in grades six to nine, and supervises the undergraduate music education majors selected to rehearse and conduct the ensemble. Prior to her appointment at Western, Dr. Richardson was an Assistant Professor of Music Education and the Wind Ensemble Director at Converse College in South Carolina.

Besides being active as a clinician, adjudicator, and guest conductor nationally, Dr. Richardson has guest conducted or presented her research at conferences in Ireland, Switzerland, Italy, Taiwan, Indonesia, Japan, Wales, and the US. Her research focuses on wind literature, conducting pedagogy, and rehearsal techniques. Publications include articles for the Canadian Winds, and the Canadian Music Educator Journal, as well as multiple study guides for the Teaching Music Through Performance in Band series. Dr. Richardson has produced two CDs with the Western University Wind Ensemble (Apparitions and Explorations), and the Hunsberger DVD within GIA’s DVD set entitled Three Icons: Frank Battisti, Donald Hunsberger, and H. Robert Reynolds.

A native of Winnipeg, Dr. Richardson graduated from Brandon University (BMus Ed), the University of Calgary (Wind Conducting Diploma, MMus Conducting), and the University of Cincinnati College-Conservatory of Music (DMA Wind Conducting).  Her primary conducting teachers have been Rodney Winther and Glenn Price. However, she has also had opportunities to study with many other well respected composers and conductors, including: Craig Kirchhoff, Karel Husa, Warren Benson, David Maslanka, Eugene Corporon, Mallory Thompson, Robert Reynolds, and Jerry Junkin.

While in Cincinnati completing her doctorate, Dr. Richardson co-directed the Tri-State Chamber Players, as well as served as the Music Director and Conductor of the Cincinnati Youth Wind Ensemble. Prior to her graduate studies, she taught general, choral, and instrumental music in the Canadian school system for 14 years. 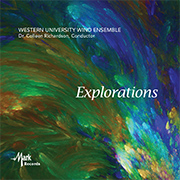 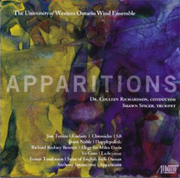 Apparitions by the Western University Wind Ensemble is on Albany Records & available at Amazon.ca and iTunes.