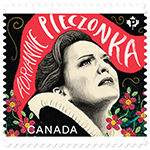 In time for the 2017 opera season, Canada Post has launched five stamps celebrating two significant Canadian-penned operas and three individuals who helped to put modern Canadian opera talent on the world stage. Of those three individuals, we are proud to note alumna Adrianne Pieczonka, BMus'85, DMus'12, soprano, was selected to be part of the series. As with all 2017 stamp issues, Canadian Opera includes references to Canada’s sesquicentennial, which are visible when the stamps are illuminated by a black light.

In their stamp design debut, Parcel Design Inc.’s creative director Gary Beelik and designer Kristine Do, with illustrator Peter Strain, have created a bold five-stamp issue that embodies the colour and drama of modern operatic performances.

Internationally celebrated for her interpretations of Wagner, Strauss, Verdi and Puccini, Pieczonka has brought to life such powerful women as Senta, Chrysothemis, Sieglinde, the Marschallin, the Kaiserin, Tosca, Elisabetta, and Amelia on leading opera and concert stages in Europe, North America and Asia. She was made an Officer of the Order of Canada (2007) in recognition of a lifetime of outstanding achievement, dedication to the community and service to the nation.

The Don Wright Faculty of Music was honoured to include Pieczonka as one of the inaugural inductees to the Alumni Wall of Fame in 2008, and she is featured in Western University's "Be Extraordinary" campaign. Visitors to Western's Talbot College will recognize her from the striking 30-foot banner on the outside of the building, installed in late 2014 to highlight select alumni who credit Western for helping them achieve their success.

Ad campaign gets year off to a banner start (Western News article, September 2014)

"Be Extraordinary" - The Campaign for Western featuring Pieczonka