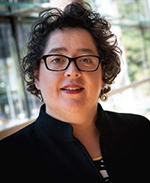 Pianist and vocal coach Liz Upchurch is one of the most sort after pianists and vocal coaches in Canada. Currently she is in her 12th season as Music Director of the Ensemble Studio at the Canadian Opera Company in Toronto. In that time she has helped to train an entire generation of Canadian opera singers including artists such as David Pomeroy, Shannon Mercer, Robert Gleadow, Krisztina Szabo, Joe Kaiser and many more. There she collaborates with celebrated guest artists including, Carol Vaness, Catherine Malfitano and Marlena Malas.

Born and educated in Britain Liz is a graduate prize-winning soloist of the Royal Academy of Music where she studied with Roger Vignoles. For many years she worked with young artists at the Britten-Pears School in Aldeburgh where she played for masterclasses with artists such as Anthony Rolfe Johnson, Suzanne Danco, William Pleeth and Dame Joan Sutherland. Upchurch has also worked at the Kammeroper Schloss Rheinsberg festival in Germany and the National Theatre in London. She held a faculty position in the 20th-century Opera and Song program at the Banff Centre for the Arts and was repetiteur and chorus director at Edmonton Opera. She has taught at the University of Toronto and for the COSI summer program in Italy. She has performed and broadcast chamber music and song recitals extensively throughout Europe and North America as well as working at opera houses such as the Glyndebourne Festival.

Currently she runs a series of vocal concerts for the Ensemble Studio and their illustrious Alumni held at the Richard Bradshaw Amphitheatre at the Four Seasons Opera Centre.